It is by walking on this land of scrubland and multi-century-old olive trees that our parents in the mid-1970s had the dream of building a hotel there... thus begins the "little story" of this family establishment whose opening dates back to 1981...

Nestled in a garden with Mediterranean essences, Hotel Cala di L'Oru has the tranquility of a large country house built to last.

Perched on the heights of Ile Rousse, you will be close to both the city centre and the beaches (10 min. by foot) while enjoying its off-centre position.

You will like to have your breakfast on the terrace in the green of the santolines and the maquis, rest and let time pass by by the pool or in a corner of the garden.

This hotel in Ile Rousse with 26 rooms and inventive interior architecture, has a neat, sparkling and colourful decoration in the common areas, more intimate and sober in the rooms.

All rooms are air-conditioned. Free Wifi. 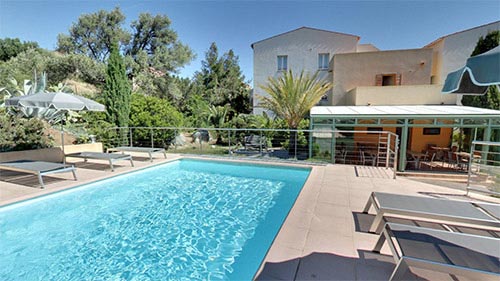